Posted on May 10, 2019 by unitedchurchofstrafford

Jesus wanted to help us see the world as the Holy Spirit taught him to see it, as God sees it.  The concept of metanoia was at the core of his ministry, meaning to move our consciousness to a new level, specifically the level that can see as God can see.

Perspective or world view is all important because it determines how we act toward others who are different, and how we organize society.  God does not see stereotypes, God does not put people in boxes and label them and extend lovingkindness to some and not to others, for God “maketh his sun to rise on the evil and on the good, and sendeth rain on the just and on the unjust.” (Matthew 5:45) 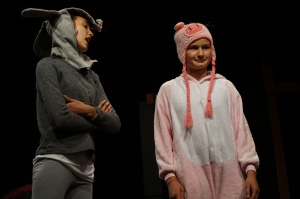 In Charlotte’s Web Templeton the Rat fits the animal stereotype but Wilbur the Pig does not.

For reasons probably necessary to human survival, stereotypes emerge as the human heart and mind evolve through childhood and adolescence.  It is part of our developmental process that we cannot see as God sees.  This is natural, but unchallenged in adults stereotypes can lead to economic inequity, bigotry, racism, holocausts and refugees who are met with walls of hostility everywhere they turn.

Jesus himself was at the most mature level of consciousness, he could see as God can see, and he saw that the only hope for the world was for humans to mature to that same level and create the realm of God on earth, what we described last Sunday as a Golden Civilization.  The Gospel of John talks about us having Christ in us and being one, and the Apostle Paul said, “Let the same mind be in you that was in Christ Jesus.”

We will not get past the stereotypes that are tearing our nation and the earth apart until we have evolved as a culture to see as God sees.  Jesus felt this was so urgent that he wept over Jerusalem and laid down his life to try to bring about our metanoia.  Imagine how urgent he would feel today when we have less than twelve years to avoid unimaginable suffering and loss and when a million species hover at the brink of extinction, perhaps including our own.

How can we speed our culture’s transformation so that it can see as God sees and love as Christ loves?

First, we need to understand that we have no time to lose, that the urgency could not be greater, and that saving the world is up to us, everyone here, together, right now.  We can no longer afford avoidance and denial.  We have to act now.

Second, we need to hope, and we do have reason to hope that human consciousness can evolve quickly.  The Age of Enlightenment three hundred years ago saw the emergence of the new rational world perspective which rose to dominance in Western Civilization in a very short time span.  The mid-1960s produced another new perspective, a pluralist stage, that came into being even more quickly.  Social scientists see another shift happening now, the emergence of a consciousness that is as close to the heart and mind of Christ as we have yet attained.  So this is no time for despair.

The third thing we need is to hear what Jesus is asking of us and make it a top priority of our congregation.  We need to take seriously the task of developmental and spiritual growth.

Children have to pass through developmental stages.  We can help them mature in a healthy and timely way.  We need their leadership and energy, we need more like Greta Thunberg and Charlotte Reimanis, and we can help them get there.

Adults need to evolve, too.  We need to become experts in how to move people ever closer to having the heart and mind of Christ.

That is what Jesus was trying to do with his teachings and actions.  We have his model and we have the Holy Spirit that he promised would guide and empower us if we opened to it.

The fourth thing we need is the Christian contemplative tradition which is designed to help us open to the Spirit and grow toward the heart and mind of Christ.  The Heartfulness Contemplative Training Circle practices this every Thursday evening.

The fifth thing we need is something we have that no other period in human history has had—the knowledge of developmental stages and growth, knowledge acquired over forty years of careful study by leading social scientists.  We need to put this new resource to use.

One piece of wisdom to come out of the research is that simply being aware of the developmental stages and being eager to evolve toward a level like Jesus is enough to help us grow more quickly.  Jesus seems to have intuited this because the story of the Good Samaritan shows the difference in perspectives that come as we evolve.  It has inspired people to strive for the Samaritan’s level for two thousand years.

The robbers are at the impulsive developmental level that young children pass through and narcissists stay stuck in, where the goal of life is immediate gratification and to be powerful and dominant and able to get what you want when you want it.  It was the culture of feudal kingdoms in ancient times and is the culture of gangs today.  Love of neighbor at this level means love of those who are part of your gang, but only as long as they do not get in the way of what you want.  Everyone else can be exploited and hurt without guilt or remorse.

The temple priest is advanced compared to the robbers in the story or to feudal lords and gangs.  He is at a fundamentalist stage where there is a clear moral, ethical, right way to be according to the rules of his group.  Love of neighbor is extended to those within that narrow set of rules, but if you are the slightest bit impure you are no longer a neighbor and the ethic of love no longer applies until you are restored to your insider status.

The man in the ditch is a Jew, but he is naked and bleeding and therefore impure according to the purity code of the day, so he is excluded from neighborly love.  This fundamentalist developmental stage is natural in teenagers, it is part of the painful struggle that adolescents have to endure, but in adults it breeds the most harmful stereotypes and can lead to polarized and uncivil discourse and disregard for the weak and vulnerable of the earth and ultimately to totalitarian governments and genocide.

This was the dominant cultural level in Jesus’ day and it still is today, but in the past three hundred and fifty years we have evolved two new stages of development, the rational (the Enlightenment) and the pluralistic (the age of liberation in the mid-Twentieth Century).  These stages are in a culture war with the fundamentalist and gang stages because they have seemingly irreconcilable differences of perspective.

The fundamentalist and gang stages are ethnocentric and bound by unquestioning adherence to beliefs and rules, whereas the rational and pluralistic are world-centric and open to questioning almost everything and able to respect diverse perspectives and ways of life.  They are capable of accepting all people—except those who are on the other side of the culture war.  The rational and pluralistic are tolerant of everything but intolerance.  They are opposed to all stereotypes except the stereotype they have for people with a fundamentalist, ethnocentric perspective.

The heart and mind of Christ is a stage beyond these, and something approaching it is beginning to be more widespread today.  It is called the universalizing stage, or nondual or integral.  It can see as God can see that everyone is a neighbor including those on the opposite side of a culture war.  This is what made Gandhi, King and Mandela able to work the miracles they did of bringing people together and transforming their societies in ways that had seemed impossible.

This is why we need as many of us as possible to grow to that stage now and why it is so important that the church become what one spiritual leader calls ‘a conveyor belt of transformation.’  The solutions to the world’s problems need to come from communities of people who have the heart and mind of Christ, who can see as God sees.  The Holy Spirit is urgently asking, will we be one of those communities?

Will you be one of those people?

Let us pray in silence…

← Upcoming Service Notes, May 12, 2019
JOIN US for Discussion and Action on Climate Change Starting June 16th →