Posted on September 14, 2018 by unitedchurchofstrafford

Before the sermon we enacted with the children a scene from the Star Wars film, The Empire Strikes Back.  You can see it here:

Here are photos from our skit: 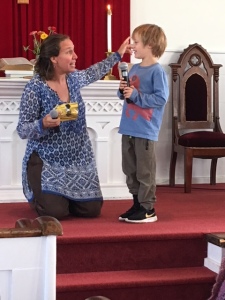 Yoda teaches Luke the power of the Force. 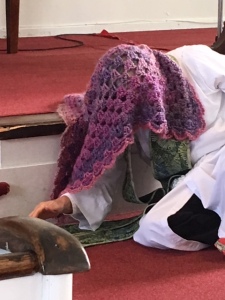 The x-wing sinks into the swamp.

This Tuesday a book entitled Fear will go on sale.  It is already the number one best seller on Amazon.  This past week Conference Minister Lynn Bujnak, wrote in the Vermont United Church of Christ newsletter, “There are times in our lives…when we want to throw up our hands in despair. Times when it seems as if there is nothing we can do to stem the tide, the erosion of everything we value the most. In those moments it is easy to trick ourselves into believing that hope is gone, that nothing can change…”

Lynn went on, “As followers of Christ, abandoning hope is not an option. We follow a God of surprises, a God who has promised to make all things new and a God who reminds us of our part in that transformation.”  Lynn is right, despair is not an option, nor is fear.  But it is going to take a miracle on a global scale to save the civilization that has nurtured us, and when we think of what our children and grandchildren may have to live through, fear and despair are rational responses.

It did not take a miracle to get us in this condition, it took decades of calculated greed, inflammatory talk shows and political opportunism.  It is no miracle that economic inequality has become so entrenched, that climate change has surged out of control, that oligarchy and authoritarian government are threatening our democratic republic, that fascist white supremacism has gained a foothold in the White House.

They have happened by strategic political and cultural groundwork.  So why do we need a miracle if we want to reverse them?  Because we do not have thirty years to rebuild the foundations of democracy.  We do not have thirty years to adopt a sane climate policy.  We need to find solutions to problems right now that seem unsolvable, and to do that, we need our culture to be transformed to have something like the heart and mind of Christ, and that is going to take a miracle.

And guess who is going to have to do that miracle: the body of Christ as it lives in the world today.  In other words, us.  So we need to learn how.

The first thing we need to do is get past our fear and despair.  This is why Jesus kept saying, do not be afraid.  Fear and despair cut us off not only from our rational cerebral cortex, as we cower in our reptilian brains, but also from the intuitive higher power within us that can work miracles.

The second thing we need to do is figure out what working a miracle means and how we would go about doing it.  Let’s look closely at today’s gospel story to see what we can notice in the miracles Jesus worked.

Jesus healed from a distance a girl with an unclean spirit or demon, meaning some kind of psychological or emotional problem that was possessing her. Then he healed a man who could not hear or speak.  Jesus put his finger in the man’s ears and spat and touched the man’s tongue, and said a word of power, “and immediately his ears were opened, his tongue was released, and he spoke plainly.”

These healings were amazing, but here is an even greater miracle.  Jewish teachers did not associate with women or people who were not Jewish.  Jesus had every right to be affronted and turn away from the gentile woman, but her deep yearning and his deep compassion connected them at a level beyond social conventions or religious and national laws.  Similarly, the man Jesus healed also was not Jewish, yet Jesus broke the laws and touched him.

The most significant miracle was that the realm of God broke into the open on earth, the greater reality that is always within and around us, the realm where we are one with all creation and we connect with the Holy Spirit of love and life and light that created the universe that can heal sickness and unite those who on the surface have been divided.

How did Jesus know he could heal at a distance, or know to put his fingers in the man’s ears and spit and say that word of power?  How did he learn to break through social barriers in a way that created the realm of God’s love and oneness?

We have a clue in the story.  It begins, “From there he set out and went away to the region of Tyre.  He entered a house and did not want anyone to know he was there.”  Tyre was not a Jewish city.  Jesus was not on a mission to the Gentiles, he was on a Mediterranean seaside retreat far from where he was well known.  Many times in the gospels we hear that Jesus went off by himself to pray and nurture his deep connection to the Spirit.

My guess is that Jesus was learning how to work miracles on the job as he went along, based on what he felt the Holy Spirit moving him to do, based on his mindful, prayerful intuition.  My guess is that the spit worked because the Spirit was in it, that the word worked because the Spirit was speaking it through him.  Spirit-filled spit heals, Spirit-filled words open ears and empower tongues, Spirit-filled love bridges all divides.  My guess is that Jesus was able to work miracles because he saw with the Spirit’s eyes that God is in us each and we are each in God, that our individual consciousness and our individual molecules are joined as one.

I believe that we will work the miracles the world needs when we open ourselves to the Spirit as completely as Jesus did, when we fill with its light and are willing to act on faith the way Jesus did.

Eight years ago a church group began studying nonviolence along the lines of what Gandhi practiced in India.  His nonviolence movement worked miracles on a national scale, but only because it first worked miracles in hearts and villages like ours.  The church group learned that meditation and mindfulness are at the core of nonviolence.  Gandhi said his greatest weapon was silent prayer, and his constant repetition of the name of God is what gave him calm and courage and strength.  The group also learned how important having compassion and listening are, and recognizing that all are one, including those on opposite sides.

A controversy arose in town as the church group was studying.  Beavers were blocking a culvert, and the select board had contracted with someone to kill them.  High school students staged a protest, and people circulated petitions.  The town became bitterly divided.  The select board called a public meeting, and members of the nonviolence group decided to go.  A few of them spoke as calming voices, but the meeting remained at a tense impasse.

One of the members of the church group was an eighty-year-old retired elementary school teacher who had never meditated before and never known much about nonviolence, and she did not know anything about beavers, but she had been changed by the months of study, so she knew how to listen to the Spirit within her for an insight and knew how to say it so both sides could hear it.

She proposed a way to handle the problem that would cost less than the select board plan and save both the road and the beavers.  She also saved the town from division and violence.  She helped it heal.  She helped it be more like the realm of God, a place of oneness and lovingkindness.

She was able to do this miracle because she had immersed in the Spirit and the ways of Christ-like nonviolence and she had been transformed.  Transformed people transform people simply by doing what comes out of their transformed hearts.  That is how the world becomes transformed.

We need miracles right now in our individual lives and nation and world, and we need to be the ones who work them.  We will be able to do them if we trust in the Psalm’s wisdom: “Happy are those whose hope is in God.”  Hoping in God and relying on the Spirit’s higher power will enable us to crawl out from under the rock of our reptilian brain and face desperate situations without fear or despair.

Hoping in God and relying on the Spirit’s higher power will change us.  As we pray, as we study, as we immerse in the practical ways of God’s realm like meditation or nonviolence, we will be transformed, and everything we do from that new transformed place will work to transform situations around us.

Hoping in God and relying on the Spirit’s higher power will reveal a new way of seeing and new gifts to solve seemingly impossible problems.

Hoping in God and relying on the Spirit’s higher power will bring us peace and even joy in the midst of turmoil that will in turn help dispel fear and despair in others.

If the way is not clear to you from what I am saying, remember that Jesus had no idea where he was going when the Spirit drove him into the wilderness, he just took the first step the Spirit revealed, and then the next.  I don’t think he had any idea how to heal people until the Spirit of compassion within him told him to do something, and then as ridiculous as it seemed, he spat on his fingers and touched a Gentile’s tongue.

Here is the next step that the Spirit is offering you.  Pray.  Listen for what is moving in the silence deep within you.  Feel where to put your foot next on the sacred way toward working a miracle in the situation that most concerns you now.  Let us pray in silence…